This trip from Moscow to Pereslavl Zalesskiy, Sergiev Posad and back to Moscow takes 11 hours altogether. Pereslavl Zalesskiy lies 120 km northeast of Moscow on the shores of Plescheevo Lake, with beautiful views and numerous historical legends. The town was established in 1152 by Prince Yuri Dolgoruky, the founder of Moscow and is a birthplace of Prince Alexander Nevsky, an outstanding Russian military commander. His descentants were buried in a magnificent Cathedral of Transfiguration of the Saviour, one of the earliest examples of Russian white stone construction of the twelfth century. The town is related to a great number of historical events and the names of famous Russian rulers. Peter the Great built here on the shore of the Plescheevo lake his famous “fun- flotilla”, which initiated the history of Russian fleet. From Pereslvl we proceed to Sergiev Posad, the most known Russian town on Golden ring route, called often the Russian Vatican. In early fourteenth century a monastery of the Trinity was founded here by Venerable Sergius of Radonezsh to become later on the largest and one of the most important centre of Russian Orthodox religion. The Trinity monastery of St. Sergius represents a fantastic architectural complex of the 14-19 centuries. The holy relics of St. Sergius lie in the oldest Trinity cathedral, famous for the icons by the greatest Russian icon painter Andrey Rublev. His famous “Trinity” icon was made for this very Cathedral. 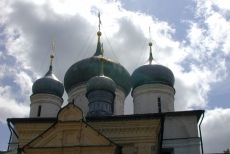 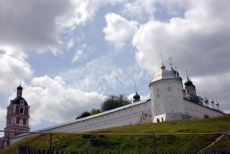 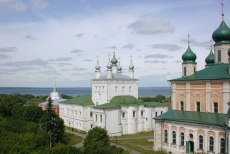 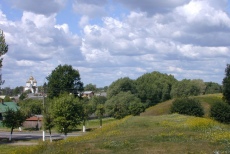