The history of making and development of «Red October» is a matter of particular pride of its employees.

All historical landmarks of the enterprise development are reflected in the exposition of the factory museum opened in 1992 and containing unique genuine exhibits.

The founder of the factory is Teodore Ferdinand von Einem, a German subject, who in 1850 arrived in Moscow in the hope to start his own business. At first, he started producing sawed sugar, then he organized in Arbat Street a small workshop for production of chocolate and sweets.

Products of «Einem» company were awarded with the golden medal at the All-Russian industrial and artistic exhibition held in Nizhny Novgorod in 1896. The enterprise was allowed to bear the national emblem of Russia on its packages. Later the factory was honored with the right to be the supplier of the court of his Emperor Majesty.

In 1900 factory «Einem» was given with the Grand-prix, the highest award of the all-world exhibition held in Paris for wide range of products and excellent quality of its chocolate.

In hard years of World War 1 «Einem» Company carried on charitable activity: made monetary donations, organized a hospital for wounded soldiers, sent wagons with cookies to the front.

After the October Revolution the factory was nationalized, in 1918 it was named «State Confectionery Factory #1, Former Einem», and in 1922 it was renamed into «Red October» (though for several years words «Former Einem» were added in brackets - so great was the popularity of the trade-mark and high-valued the quality of products!).

Just in those years a lot of products «were born» which even today comprise the «golden» fund of «Red October»: in 1925 «Mishka Kosolapy» (Pigeon-Toed Bear) appeared, in 1927 - «Yuzhnaya Noch» (Southern Night); in 1936 - «Stratosphere» and «Souffle». In 1920s for the first time «Slivochnaya Pomadka s Tsukatom» (Cream fondant with candied fruit), «Slivochnaya Tianuchka» (Cream toffee), «Kis-Kis» (Puss-Puss) toffee appeared. These names and taste are familiar to many generations of the buyers 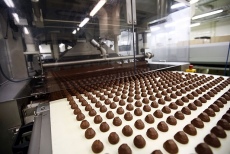 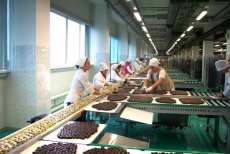 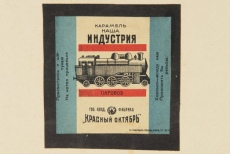 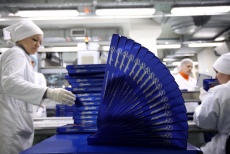