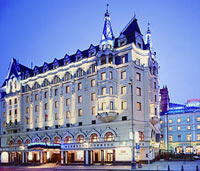 The hotel was opened in 1998, located in the heart of the historical centre of Moscow,500 meters from the Red Square, one block from Bolshoi Theatre and 40 minutes drive from the Sheremetyevo International Airport, 15 minutes from Belorussky railway station.

The order of hotel on-line